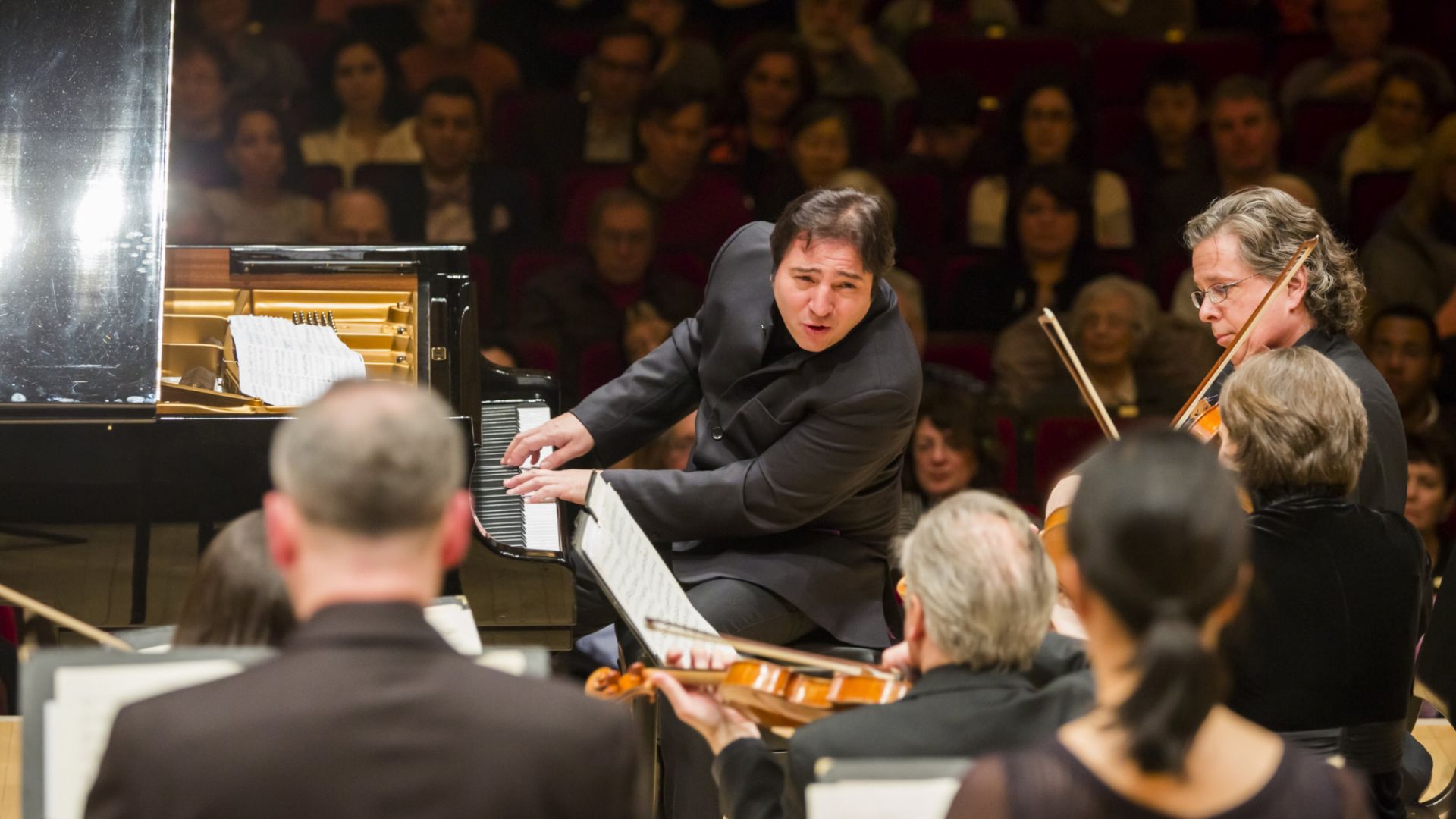 The final concert of Orpheus Chamber Orchestra’s 2021/22 season at Carnegie Hall features the Turkish pianist Fazil Say. Say joins the orchestra for two selections -his own Silk Road Piano Concerto No. 2, Op. 4, in which he shares his own musical exploration of the legendary Silk Road and Turkey’s role in this fascinating chapter of history - and Mozart’s Piano Concerto No. 23 in A Major, K. 488, composed in his heyday in Vienna. These selections, chosen very deliberately, are a symbol of reunion and musical friendship; Orpheus and Say last collaborated in 2015 and 2016 Carnegie Hall together, with performances declared to be “all exuberance” by The New York Times.

With his extraordinary pianistic talents, Fazıl Say has been celebrated by audiences and critics alike for more than twenty-five years. Concerts with this artist are something different. They are more direct, more open, more exciting and more heartfelt than the typical musical fare. Say was just 24 years old in 1994 when he composed Silk Road, following extensive study of ancient Eastern folk music in the archives of the Berlin Museum of Ethnology. This remarkable concerto is divided into four movements, each one capturing the musical devices of a different region found along the 4,000 mile trade route: Tibet (White dove, black clouds), India (Hindu Dances), Mesopotamia (Massacre), and Anatolia (Earth Ballad), modern-day Turkey. The movements are interconnected by the striking of the tam-tam, signifying the thread of Chinese influence throughout.

In the years shortly after Mozart married and took the Viennese by storm with his prodigious compositions and blazingly virtuosic keyboard playing, his main sources of income as a freelancer were the concerts he self-produced; between 1784 and 1786 alone, concertgoers enjoyed a dozen piano concertos by the young composer. Early sketches of the Piano Concerto No. 23 included two oboes in the instrumentation, but at the time of the work’s publishing into Mozart’s astonish catalogue, he had revised this detail to include clarinets instead, helping to usher in the relatively new concept of more wind-heavy orchestrations.

The concert concludes with the Orchestra performing a lush chamber orchestra arrangement of Tchaikovsky’s String Quartet No. 1, ranging from sweet to romantic to fiery, with folk motifs throughout. Some years after its premiere, Tchaikovsky wrote in his diary after a performance of the Quartet at the Moscow Conservatory: "Never in my life have I felt so flattered and proud of my creative ability as when Leo Tolstoy, sitting next to me, heard my andante with tears coursing down his cheeks." This arrangement by the composer Christopher Theofanidis for chamber symphony blossoms while maintaining its inherent intimacy.

The Carnegie Hall performance on April 29 will be preceded by a concert with the same program and artists at the Morris Museum in Morristown, New Jersey, on April 28.

ADDITIONAL PERFORMANCES OF THIS PROGRAM

Orpheus Chamber Orchestra is a radical experiment in musical democracy, proving for fifty years what happens when exceptional artists gather with total trust in each other and faith in the creative process. Orpheus began in 1972 when cellist Julian Fifer assembled a group of New York freelancers in their early twenties to play orchestral repertoire as if it were chamber music. In that age of co-ops and communes, the idealistic Orpheans snubbed the “corporate” path of symphony orchestras and learned how to play, plan and promote concerts as a true collective, with leadership roles rotating from the very first performance. Within its first decade, Orpheus made Carnegie Hall its home and became a global sensation through its tours of Europe and Asia. Its catalog of recordings for Deutsche Grammophon, Nonesuch and other labels grew to include more than 70 albums that still stand as benchmarks of the chamber orchestra repertoire, including Haydn symphonies, Mozart concertos, and twentieth-century gems by Stravinsky, Schoenberg, Ravel, and Bartók.

The sound of Orpheus is defined by its relationships, and guest artists have always been crucial partners in the process. Orpheus brings the best out of its collaborators, and those bonds deepen over time, as heard in the long arc of music-making with soloists such as Richard Goode and Branford Marsalis, and in the commitment to welcoming next-generation artists including Nobuyuki Tsujii and Tine Thing Helseth. Breaking down the barriers of classical repertoire, partnerships with Brad Mehldau, Wayne Shorter, Ravi Shankar, and many others from the sphere of jazz and beyond have redefined what a chamber orchestra can do. Relationships with composers and dozens of commissions have been another crucial way that Orpheus stretches itself, including a role for Jessie Montgomery as the orchestra’s first ever Artistic Partner.

At home in New York and in the many concert halls it visits in the U.S. and beyond, Orpheus begins its next fifty years with a renewed commitment to enriching and reflecting the surrounding community. It will continue its groundbreaking work with those living with Alzheimer’s Disease through Orpheus Reflections, and the Orpheus Academy as well as the Orpheus Leadership Institute spread the positive lessons of trust and democracy to young musicians and those in positions of power. Each year, Access Orpheus reaches nearly 2000 public school students in all five boroughs of New York City, bringing music into their communities and welcoming them to Carnegie Hall. Always evolving as artists and leaders, the Orpheus musicians carry this communal legacy forward, counting on their shared artistry and mutual respect to make music and effect change.