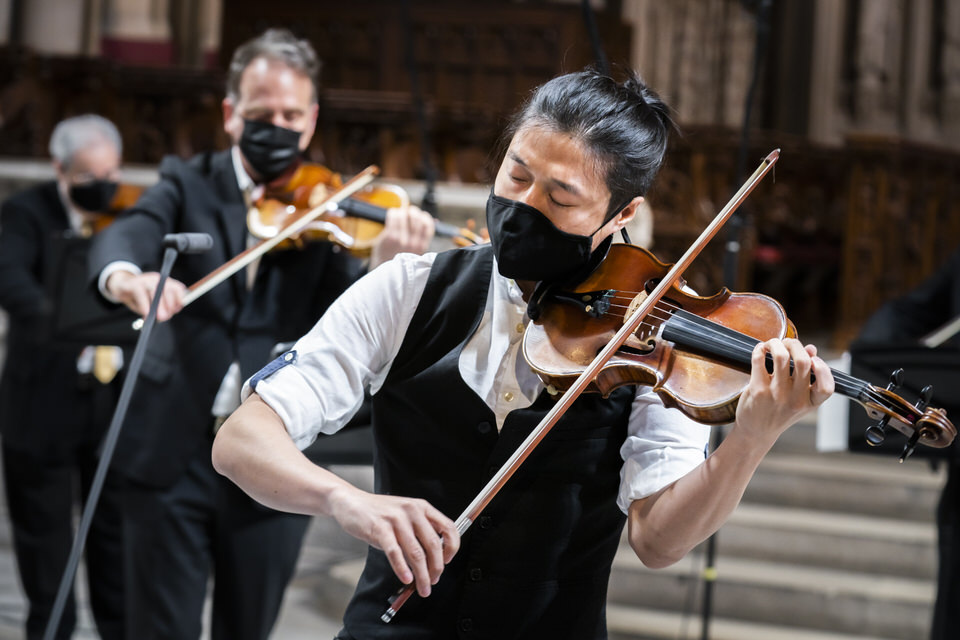 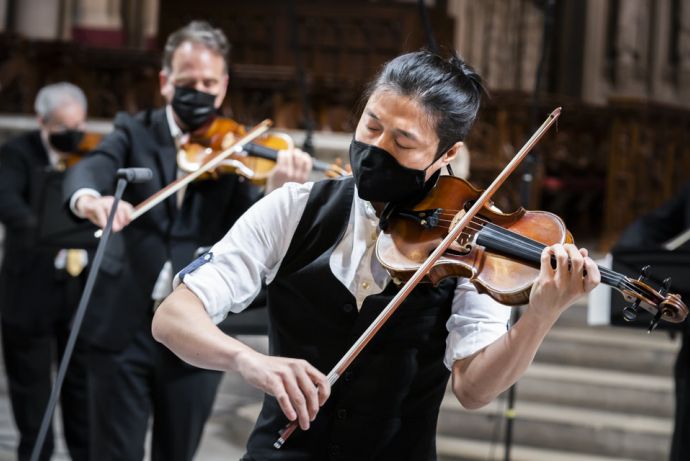 All guests must be vaccinated, masks are not required. 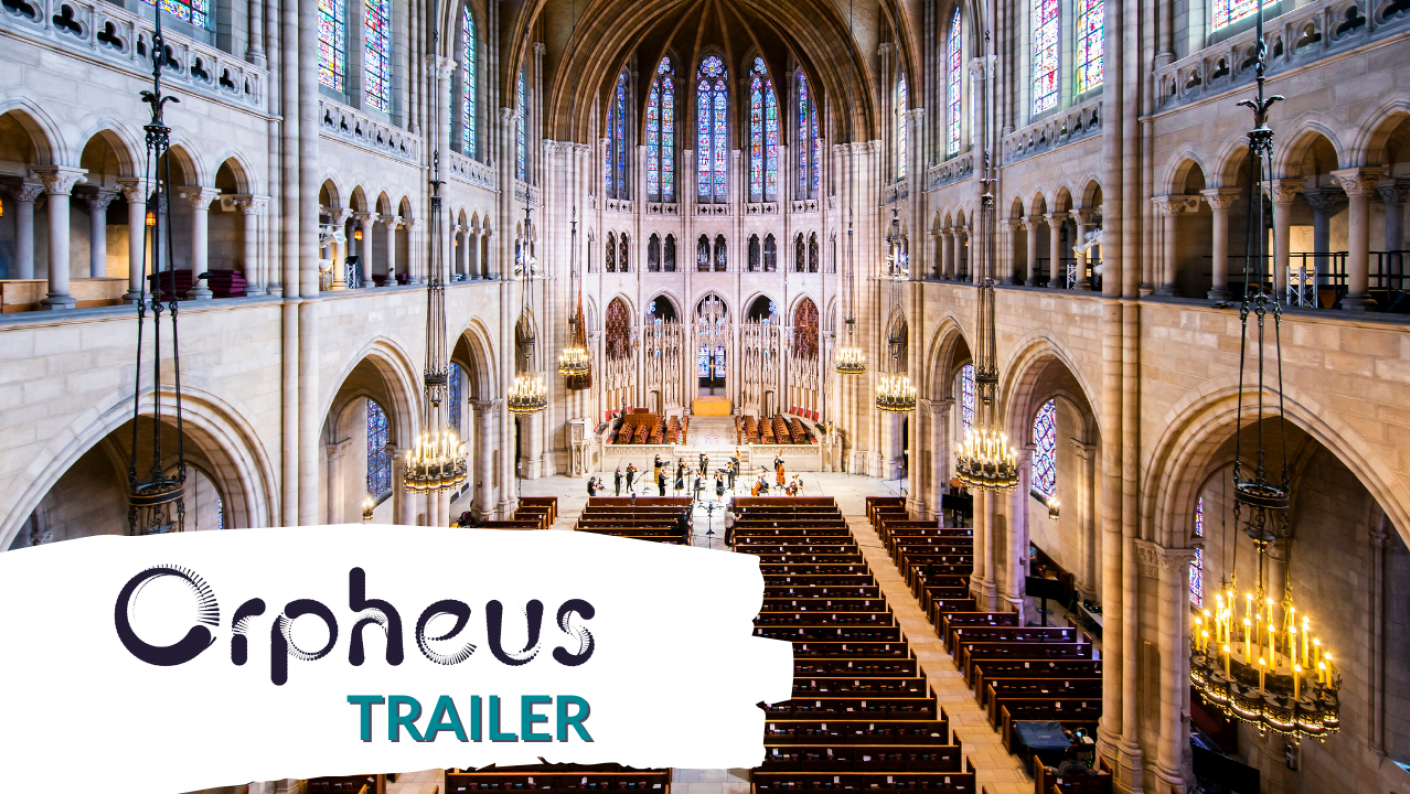 Notes on the Program

One of the very first composers known by name was Pérotin, a French church musician who probably worked at Notre Dame in Paris around 1200. In that period when simple liturgical chant was just starting to blossom into the multilayered vocal music that seeded the entire tradition of Western art music, Pérotin stood out to an anonymous British commentator later in the century, and it is through this one written appraisal that we can attribute specific compositions to him, including a call-and-response melody to match the Latin text of Beata viscera, a poem from the same era recognizing the wonder and mystery of the Virgin Mary.

Pérotin’s melody is no less resonant today, and it has proved adaptable in a variety of settings, including a famous crossover recording made in 1994 that paired jazz saxophonist Jan Garbarek with the early music vocalists of the Hilliard Ensemble. When Orpheus commissioned its newest associate member Gregg August (b. 1968) to compose a work for this program, his thoughts turned to Garbarek’s recording and another Beata viscera rendition by his late friend Alexandra Montano, a distinguished classical vocalist.

August’s Variations on a Theme by Pérotin, scored for string orchestra and solo violin, takes advantage of the natural reverberation of Riverside Church and the richness of the Orpheus sound. It also leans on the stylistic range of soloist Charles Yang, who can traverse fluidly from a virtuosic cadenza to an improvised vamp. August himself straddles classical, jazz and Latin styles in his work as a composer and bandleader, and his role as the bassist anchoring the string orchestra allows for an openness in the musical treatment that will only reveal its final form in the moment of performance.

Recipient of the 2018 Leonard Bernstein Award and described by the Boston Globe as one who "plays classical violin with the charisma of a rock star", Juilliard graduate Charles Yang began his violin studies with his mother in Austin, Texas, and has since studied with world-renowned pedagogues Kurt Sassmanshaus, Paul Kantor, Brian Lewis and Glenn Dicterow. He has performed as a soloist with orchestras and in concert in the United States, Europe, Brazil, Russia, China, and Taiwan, and is the recipient of numerous awards and honors. On June 9th of 2005, the Mayor of Austin presented Mr. Yang with his own "Charles Yang Day". In 2016 Mr. Yang joined the crossover string-band, Time for Three.

Not only confined to classical violin, Mr. Yang's improvisational crossover abilities as a violinist, electric violinist, and vocalist have led him to featured performances with a variety of artists in such festivals as The Aspen Music Festival, The Schleswig- Holstein Music Festival, The Ravinia Festival, The Crested Butte Music Festival, The Cayman Arts Festival, The YouTube Music Awards, The Moab Music Festival, TED, Caramoor, The EG Conference, Google Zeitgeist, Interlochen, and onstage at venues such as Carnegie Hall, Alice Tully Hall, Lincoln Center’s Metropolitan Opera House, David H. Koch Theater, Dizzy’s and David Rubinstein Atrium; The Long Center, Rudolfinum, The Royal Danish Theatre, Le Poisson Rouge, Highline Ballroom, Ars Nova, The Metropolitan Museum of Art, and The Forbidden City in Beijing among many others. He has performed in the presence of two former US Presidents, the Queen of Denmark and has shared the stage in collaborations with artists including Peter Dugan, CDZA, Steve Miller, Jesse Colin Young, Jake Shimabukuro, Ray Benson, Michael Gordon, Marcelo Gomes, Savion Glover, Twyla Tharp, Misty Copeland, and Jon Batiste. Mr. Yang recently made his solo debut with Marin Alsop and The Chicago Symphony at The Ravinia Festival. His career has been followed by various news media including The New York Times, The New York Post, The Wall Street Journal, The Chicago Tribune, The Boston Globe, The Financial Times, The Austin-American Statesman, The Austin Chronicle and The Strad. Mr. Yang is featured in Nick Romeo's book, Driven as well as Discovery Channel's Curiosity.

Regarding Mr. Yang, The Texas Observer has noted, “Mr. Yang is a true crossover artist, a pioneer who can hop between classical and popular music and bring fresh ideas to fans of both genres. Rather than maintaining an insular focus and simply assuming that an audience for classical music will always exist, he wants to actively create that audience, to persuade and seduce others into enjoying a type of music as passionately as he does.”

Bassist and composer Gregg August spans the classical, avant-garde, jazz and Latin jazz worlds making him one of the most versatile musicians on the scene today. He is an Associate member of the Orpheus Chamber Orchestra as well as a member of the American Composers Orchestra and Orchestra of St. Luke’s. Gregg is also the former Principal Bass of La Orquestra Ciutat de Barcelona and the Brooklyn Philharmonic.

As a jazz bassist Gregg is a member of the JD Allen Trio, having recorded 9 albums with the group, as well as Arturo O’Farrill’s Afro-Latin Jazz Orchestra, with whom he’s won 5 GRAMMY awards. In 2003 Gregg formed his own record label, Iacuessa Records, for which he has recorded four critically acclaimed albums of entirely his own original music: Four by Six ( 2014), One Peace (2007) and Late August (2005).

In August of 2020 Gregg released Dialogues on Race (Iacuessa Records). The album received a GRAMMY nomination in the Best Large Jazz Ensemble category. An extended suite for a 12 piece large jazz ensemble, three vocalists, strings and narrator, the work deals with the subject of race relations in the United States. He utilizes poems by Maya Angelou, Langston Hughes, Marilyn Nelson and others to create a musical conversation that is intended to help bring awareness and foster understanding on the issues surrounding race.

Gregg was awarded two Grand Prizes by the International Society of Bassists for the 2020 David Walter Composers Competition in both the Chamber Ensemble and Bass Ensemble categories. He has also composed many full length concert works, including “Una Rumba Sinfonica,” a commission from the Jazz Composers Orchestra Institute and Earshot, which was premiered by the Buffalo Philharmonic.

Gregg has performed and/or recorded with The New York Philharmonic, Steve Reich, The Bang on a Can All Stars, Alarm Will Sound, as well as Ornette Coleman, Chick Corea, Branford Marsalis and Ray Barretto. Gregg was on the Downbeat Magazine Critics’ Rising Star Poll in 2017, 2015 and 2013.

An adjunct professor at New York University and Williams College, Gregg has also been on faculty at the Bang on a Can Summer Music Festival at MASS MoCA (North Adams, MA) since 2003.

Gregg received his bachelor’s degree from the Eastman School of Music and his master’s from the Juilliard School.