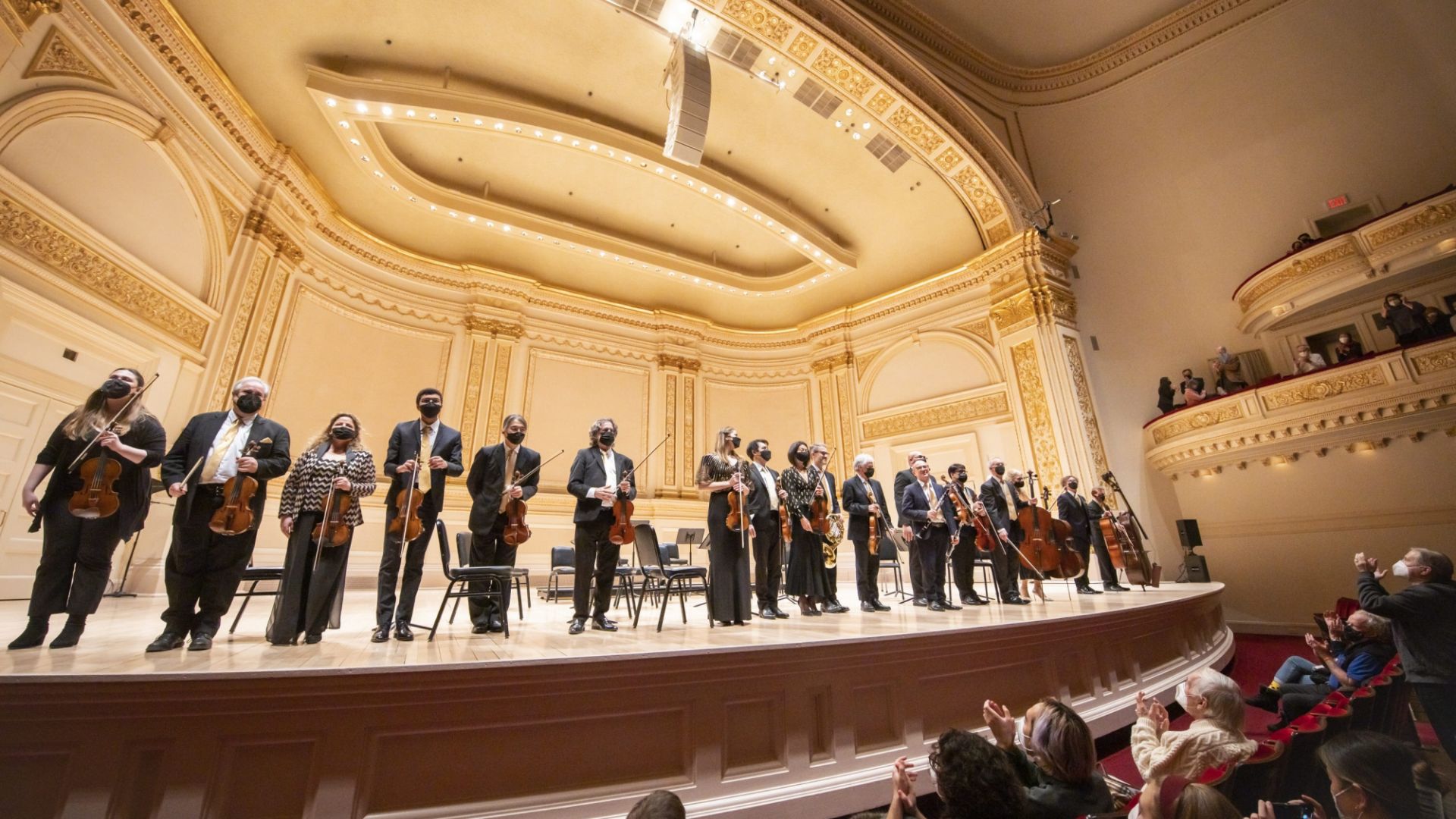 ABOUT ORPHEUS:
Orpheus Chamber Orchestra is a radical experiment in musical democracy, proving for fifty years what happens when exceptional artists gather with total trust in each other and faith in the creative process. Orpheus began in 1972 when cellist Julian Fifer assembled a group of New York freelancers in their early twenties to play orchestral repertoire as if it were chamber music. In that age of co-ops and communes, the idealistic Orpheans snubbed the “corporate” path of symphony orchestras and learned how to play, plan and promote concerts as a true collective, with leadership roles rotating from the very first performance.

It’s one thing for the four players of a string quartet to lean into the group sound and react spontaneously, but with 20 or 30 musicians together, the complexities and payoffs get magnified exponentially. Within its first decade, Orpheus made Carnegie Hall its home and became a global sensation through its tours Europe and Asia. Its catalogue of recordings for Deutsche Grammophon, Nonesuch and other labels grew to include more than 70 albums that still stand as benchmarks of the chamber orchestra repertoire, including Haydn symphonies, Mozart concertos, and twentieth-century gems by Stravinsky, Schoenberg, Ravel, and Bartók.

ABOUT ANGELA HEWITT:
Angela Hewitt occupies a unique position among today’s leading pianists. With a wide-ranging repertoire and frequent appearances in recital and with major orchestras throughout Europe, the Americas and Asia, she is also an award-winning recording artist whose performances of Bach have established her as one of the composer’s foremost interpreters. In 2020 she received the City of Leipzig Bach Medal: a huge honour that for the first time in its 17-year history was awarded to a woman.

In September 2016, Hewitt began her Bach Odyssey, performing the complete keyboard works of Bach in a series of 12 recitals. The cycle was presented in London’s Wigmore Hall, New York’s 92nd Street Y, and in Ottawa, Tokyo and Florence, concluding in 2022. After her performances of the complete Well-Tempered Clavier at the 2019 Edinburgh Festival, the critic of the London Times wrote, “…the freshness of Hewitt’s playing made it sound as though no one had played this music before.”

Hewitt’s award-winning cycle for Hyperion Records of all the major keyboard works of Bach has been described as ​“one of the record glories of our age” (The Sunday Times). Her discography also includes albums of Couperin, Rameau, Scarlatti, Mozart, Chopin, Schumann, Liszt, Fauré, Debussy, Chabrier, Ravel, Messiaen and Granados. The final CD in her complete cycle of Beethoven Sonatas (Op.106 and Op.111) was released in February 2022, and the first of three Mozart albums, dedicated to the composer’s complete sonatas, is released in November 2022. A regular in the USA Billboard chart, her album Love Songs hit the top of the specialist classical chart in the UK and stayed there for months after its release. In 2015 she was inducted into Gramophone Magazine’s Hall of Fame thanks to her popularity with music lovers around the world.

A frequent concerto soloist, he has worked with ensembles including the Grant Park Festival Orchestra and Orchestra of St. Luke’s. In recital, recent highlights include engagements with the Kennedy Center and the Morgan Library & Museum. Anthony is second flutist with ProMusica Chamber Orchestra in Columbus, OH, and appears with the Orpheus Chamber Orchestra, Kaleidoscope Chamber Orchestra, and Jupiter Chamber Players.

Anthony is a founder of the Umoja Flute Institute, a non-profit dedicated to providing flutists of African descent with the tools needed to succeed and thrive at all levels of music-making. He serves on the Diversity, Equity, and Inclusion Committee for Aspen Music Festival and has collaborated with organizations including the DC Youth Orchestra Program and Harmony Program.

Anthony graduated from the Colburn School Conservatory of Music and Interlochen Arts Academy. You can learn more about Anthony by visiting him at his website, trionfoflute.com, or on Instagram @toneyflute.

ABOUT ABI FAYETTE:
​​Violinist Abi Fayette is the youngest of four children in a musical family and began her violin studies at age three with her mother. She holds degrees from The Curtis Institute of Music and New England Conservatory where she studied with Ida Kavafian and Soovin Kim respectively. Other principal teachers include Ann Setzer, Kyung-Wha Chung, and Joseph Silverstein. Fayette’s passionate love for chamber music has led to performances with Jonathan Biss, Brett Dean, Kim Kashkashian, Ida Kavafian, Joseph Silverstein, Jörg Widmann, and Peter Wiley. Her performances as a soloist, chamber and orchestral musician have taken her all over the world with appearances spanning across the United States, Europe, and Asia. Currently she is a violinist in the Catalyst Quartet and a member of Orpheus Chamber Orchestra. Abi performs on a violin made in 1860 by Jean-Baptiste Vuillaume generously on loan from Marlboro Music.