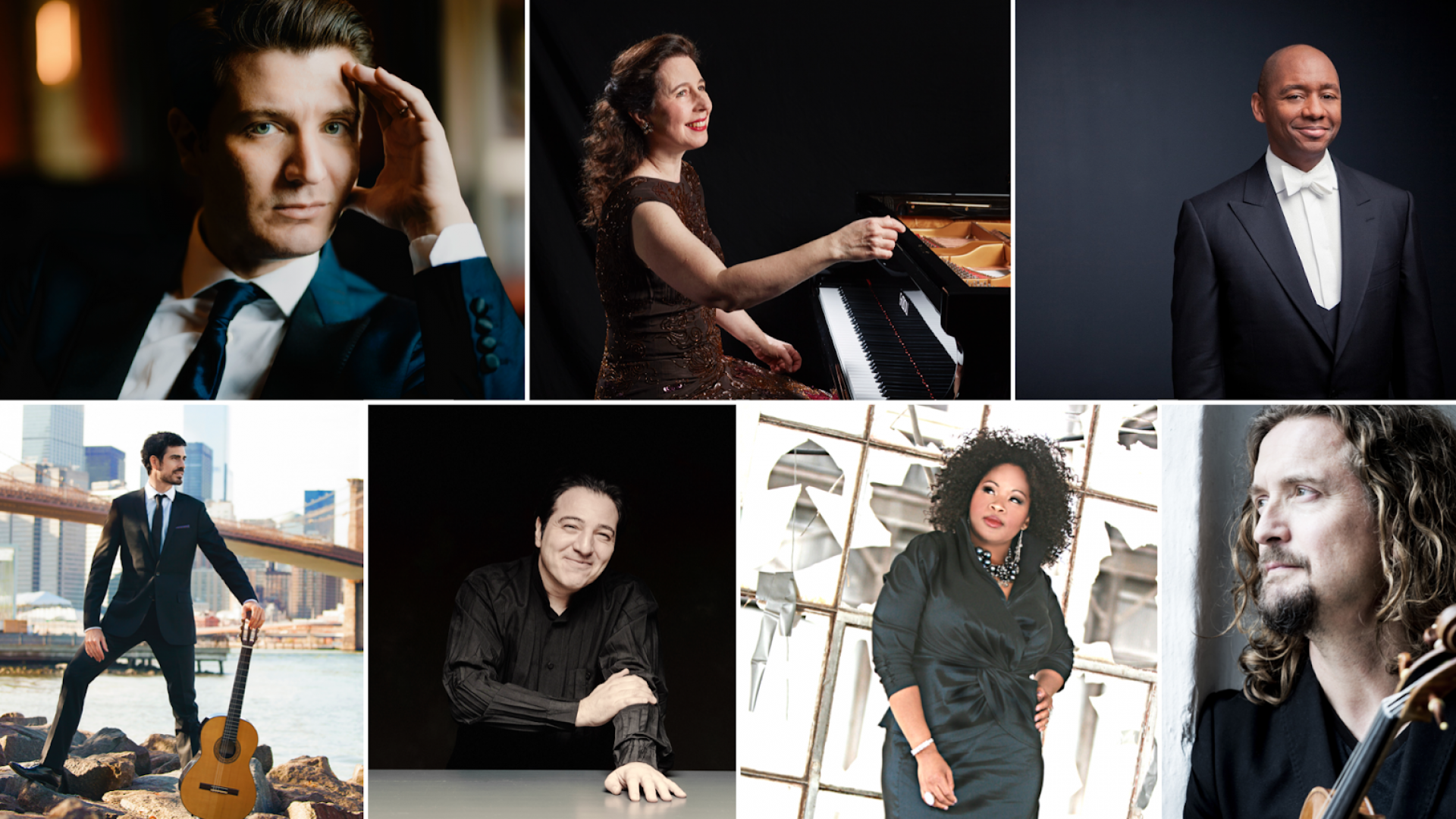 NEW YORK, NY (May XX, 2020) — Orpheus Chamber Orchestra today announces programming for its 2020-21 season with three concerts presented by the organization in Stern Auditorium / Perelman Stage at Carnegie Hall and two concerts presented by the 92nd Street Y, as well as touring engagements throughout the United States. Orpheus collaborates this season with an innovative group of soloists including soprano Karen Slack, guitarist Pablo Sáinz-Villegas, saxophonist Branford Marsalis, and pianist Fazil Say at Carnegie Hall, and Angela Hewitt and Christian Tetzlaff at 92Y, in addition to Alessio Bax on tour.

In announcing the 2020-21 season, Executive Director Alexander Scheirle expresses, “As the response to COVID-19 continues, we acknowledge that our concert schedule may change, and that our own lives are just as unpredictable. But we can make this promise: we'll be here when the concert halls open. We'll be here when the ushers start scanning tickets. We'll be here, ready with our music for healing, connecting, and celebrating. And we look forward to sharing that moment with our fans."

Before the New York City season opens, Orpheus embarks on a tour with pianist Alessio Bax with concerts in Texas and New York, including Saturday, October 10, 2020 at 7:00 p.m. at Stude Concert Hall at Rice University’s Shepherd School of Music in Houston presented by Chamber Music Houston. The performances feature Elgar’s Serenade in E minor for Strings, Op. 20; Dvořák’s Notturno in B, Op. 40; Suk’s Serenade for Strings; and Mozart’s Concerto for Piano No. 12 in A Major K414 with Bax as featured soloist.

Orpheus officially opens its 2020-21 season on Saturday, October 17, 2020 at 8:00 p.m. in Stern Auditorium/Perelman Stage at Carnegie Hall with Speaking Truth to Power, an homage to courageous voices. The concert features soprano Karen Slack in the New York premiere of Tarkmann’s chamber orchestra arrangement of Beethoven’s Incidental Music from Egmont, Op. 84, accompanied by a powerful new translation of Goethe’s historical drama by Philip Boehm. Orpheus pairs this work with Valerie Coleman’s Phenomenal Women, a work inspired by Maya Angelou’s poem and book of the same name in which virtuosic soloists within the orchestra weave inspiring portraits of real-life heroines in storied moments of adversity and achievement. Orpheus premiered the chamber orchestra arrangement of Phenomenal Women at the Library of Congress in Washington D.C in 2019.

The performance is bookended by an extensive seven-state US tour featuring Marsalis as soloist from January 8-26, 2021, including stops on Saturday, January 9, 2021 at 8:00 p.m. at the Segerstrom Center for the Arts in Costa Mesa, California; on Monday, January 11, 2021 at 7:30 p.m. presented by Palm Springs Friends of Philharmonic at the McCallum Theatre in Palm Desert, CA; on Wednesday, January 21, 2021 at 8:00 p.m. at The Music Center at Strathmore in Bethesda, Maryland; on Tuesday, January 26, 2021 at 7:30 p.m. at Orchestra Hall in Chicago, Illinois; and many more to be announced. The tour concerts include a program of Rossini’s Overture to The Barber of Seville, Rodrigo’s Soleriana, Ibert’s Concertino da camera, Debussy’s Rhapsody for alto sax & orchestra, Turina’s La oración del torero, and Bryan’s Carmen Jazz Suite on Themes by Bizet.

On Tuesday, April 13, 2021 at 7:30 p.m, the 92nd Street Y presents Orpheus in an all-Mozart program featuring German violinist Christian Tetzlaff in the composer’s Concerto for Violin No. 3 in G Major, K216 and Rondo in C Major for Violin and Orchestra, K373, paired with Mozart’s Symphony No. 10 in G, K74 and Symphony No. 29 in A, K201 (K186a). The Chicago Tribune describes Tetzlaff’s playing as having an “extra degree of incisive brilliance and fierce elegance.”

Orpheus Artistic Director James Wilson says, "Equality, justice, beauty and tradition – these powerful words reverberate through both Orpheus Chamber Orchestra's mission and our 2020-21 season. We are thrilled to bring our audiences the musical treasures of Mozart, Bach, and Debussy, in addition to exciting new creations by trail blazers such as Courtney Bryan, Valerie Coleman and Fazil Say. And it all kicks off with a bang with Beethoven's ode to freedom, ‘Egmont.’"

Orpheus believes in empowering the unique voice of all people to make a valuable contribution. Working together as a collective of leaders, members explore each other’s musical ideas using their signature collaborative method, the Orpheus Process®, and give flight to vibrant, unconventional interpretations. Orpheus performances unfold dynamically, moment-by-moment, creating an energy shared by musicians and audiences alike.

The Grammy Award-winning ensemble was founded in 1972 by a group of like-minded young musicians determined to combine the intimacy and warmth of a chamber ensemble with the richness of an orchestra and has performed without the use of a conductor since its inception. Musicians rotate leadership roles for all rehearsals and performances as well as organizational capacities such as programming and governance.

Orpheus has recorded over 70 albums on all major classical labels and commissioned and premiered 49 new works for chamber orchestra. Orpheus presents an annual performance series in New York City featuring collaborations with world-class guest soloists. A touring ensemble, Orpheus has performed in major international venues across 167 cities in 46 countries across four continents and has appeared regularly in Japan for 30 years.

Orpheus is committed to sharing its collaborative Process® with communities worldwide through engagement programs for listeners of all ages. These include underwritten concert tickets and in-class visits from musicians for K-12 NYC students, development opportunities for emerging professional musician from demographics underrepresented in classical music, and Orpheus Reflections, an enriching program for people living with Alzheimer’s Disease and dementia and their caregivers.

In 1972, a group of young artists made history by creating an orchestra without a conductor in which musicians led themselves democratically. Since then, the Grammy Award-winning Orpheus Chamber Orchestra has recorded over 70 albums on all major classical labels, toured to 46 countries across four continents, and collaborated with hundreds of world-class soloists.

Orpheus’ 34 member musicians work together as a collective and rotate leadership roles for all works performed, giving flight to unconventional interpretations. This democratic structure also extends to organizational functions including programming and governance: the orchestra elects three members to Artistic Director positions and three to the Board of Trustees.

Orpheus shares its collaborative model through education and community engagement initiatives that promote equity and access to the arts for listeners of all ages around the world. These include programs for K-12 students, opportunities for emerging professional musicians, and a music and wellness program for people living with Alzheimer’s disease and other forms of dementia.

For more information about Orpheus please visit www.OrpheusNYC.org or call 212-896-1700.