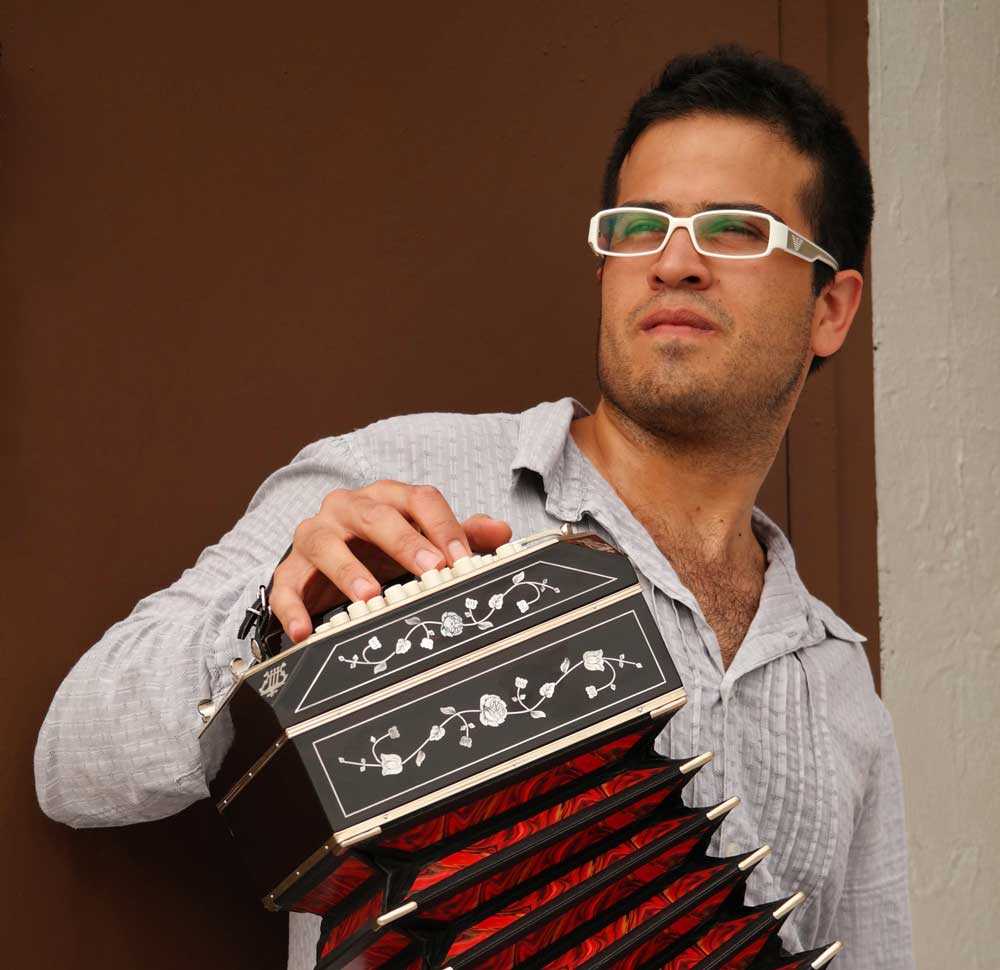 "In this concert with Orpheus Chamber Orchestra, the composer and bandoneonist J. P. Jofre plays his Tangodromo No. 1—a striking demonstration of his instrument’s varied moods, from eerie croons to spiky jollity..." — Fergus McIntosh, The New Yorker

Native from San Juan, Argentina, Juan Pablo Jofre Romarion aka JP Jofre, is an award-winning bandoneon player and composer. Mr. Jofre has been repeatedly highlighted by the New York Times and praised as one of today’sleading artists by Great Performers at Lincoln Center. His music has been recorded by 16 Grammy winner Paquito D’ Rivera, Orpheus Chamber Orchestra and choreographed/performed by ballet-star Herman Cornejo (Principal Dancer of the American Ballet Theatre) among others. He has performed and given lectures at Google Talks, TEDtalks, The Juilliard School of Music, The New School, etc.A recipient of the National Prize of the Arts grant in Argentina, Mr. Jofre has collaborated with many famous musicians in a wide range of musical styles, including Paquito D’Rivera, Kathryn Stott, Symphony Silicon Valley, Santa Rosa Symphony Orchestra, Orquesta Sinfónica Nacional de Argentina, San Antonio Symphony, San Diego Symphony, Philippe Quint, Fernando Otero, and Fred Sturm among others. Mr. Jofre has been part of many prestigious festivals including the Celebrity Series of Boston, Umbria Jazz Festival, Great Performers at Lincoln Center, Seattle Town, Belgorod Music Festival, Sudtirol Jazz Festival, Bachanalia Taiwan, and Lorin Maazel’s Castleton Festival among others. For the world premiere of his Bandoneon Concerto, the Mercury News wrote: “…he is an electrifying composer-bandoneon player.”

In 2012, Jofre was invited by the Free University of Bolzano and SudTirol Festival (Italy) to perform for the homage to Argentinean Nobel Peace Prize winner, Adolfo Perez Esquivel. He currently leads the JP Jofre Quintet, the ensemble has been touring internationally since the release of their last album “Manifiesto”. Mr. Jofre is currently writing the second Double Concerto for violin virtuoso Francisco Fullana, commissioned by Classical Music Institute of San Antonio, Balearic Islands Symphony Orchestra and Metropolis Ensemble. Recently, virtuoso clarinet player Seunghee Lee commissioned Mr. Jofre to write a double concerto for clarinet and bandoneon. His recordings have been released by RoundStar Entertainment for his debut album Hard Tango, produced by Gustavo Szulansky) Steinway Record Label, Armenia Mundi, and Progressive Sounds (independent). J.P. Jofre began playing percussion and guitar at the age of 14 and later attended the Escuela de Musica de la Universidad Nacional de San Juan, Argentina, where he studied, drums, guitar, piano, voice, and composition, before deciding to dedicate himself to the bandoneón. In 2003, Jofre gave his debut performance as arranger and solo bandoneonist at the First International Festival of Chamber Music in Mendoza, Argentina. For this event, Jofre arranged pieces for 12 Cellos and Bandoneon. In 2004 Jofre took privates classes with Martin Ferres and one year later auditioned for Daniel Binelli, one of the world’s most sought-after bandoneonists and composers. With Binelli’s recommendation, Jofre studied under Julio Pane, world-renowned educator and former bandoneónista for the legendary “Astor Piazzolla Sextet” through the financial endorsement of the Juan Victoria Auditorium (under Executive Director Nina Galvan at the time) and Autotransportes San Juan Mar del Plata. At the 2005 Clausura Concert of the Master Class given by Ingrid Zur and George Heyer (Germany) in San Juan, Jofre performed solo works of Bach and Piazzolla. That same year, he performed alongside Latin America’s most important musical figures Jairo, Horacio Ferrer, and Garello at the presentation ceremony for the book Adventures and Triumphs of Argentines in Paris at the Hall Café Tortoni in Buenos Aires. In 2006, he toured Spain with the Mendocino Tango Sextet, giving both solo and group performances at the International Tango Festival of Granada and the International Tango Festival of Alméria. At the inauguration ceremony for the Granada School for the Bandoneón, Jofre performed with bandoneon master Rodolfo Montironi. More at www.jpjofre.com