A Night At The Opera Featuring Gina Cuffari & Frank Morelli 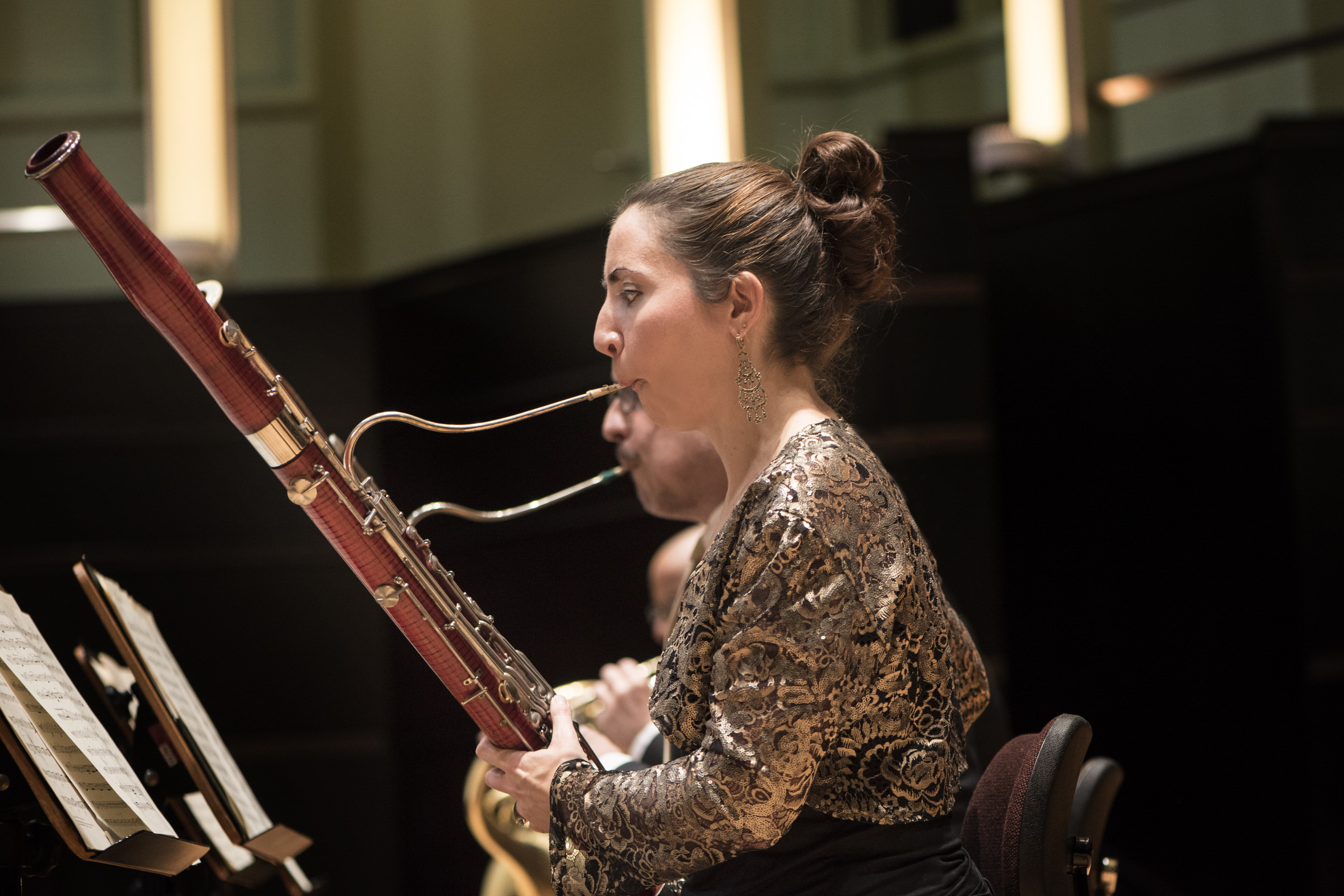 Bassoonist Gina Cuffari is a dynamic and versatile musician who performs a variety of roles in the New York City area as an orchestral musician, chamber musician, soloist, new music advocate, and educator. Praised for having a "sound that is by turns sensuous, lyric and fast-moving" (Palm Beach Daily News), Gina is the Co-Principal Bassoonist of the Orpheus Chamber Orchestra. For over a decade, Gina has performed and recorded throughout the USA, Europe, and Asia with this prestigious ensemble, and has been an active participant in their community engagement programs such as Access Orpheus (teaching at NYC public schools) and the Reflections program (performing for Alzheimer's patients and their caregivers). Gina is also the Associate Principal/2nd Bassoonist of the Lincoln Center-based Riverside Symphony, as well as a frequent performer with Orchestra of St. Luke's, American Composers Orchestra, Westchester Philharmonic, American Ballet Theater, Iris Orchestra in Memphis, TN, and many more. In addition, Gina has played in recent Broadway productions of Fiddler on the Roof, Sunset Boulevard, and My Fair Lady as a substitute bassoonist.

Gina's passion for chamber music has led her to collaborate with many amazing musicians and ensembles over the years. She is currently a member of the Jupiter Symphony Chamber Players and Sylvan Winds, and a founding member of Trio Cabrini, a clarinet, bassoon/voice, piano ensemble. She performs throughout New England with the Boston-based Walden Chamber Players and has had recent engagements with the Exponential Ensemble, Tertulia Ensemble, and Camerata Pacifica in Santa Barbara, California.

Gina has always had a keen interest in new music and has endeavored to support composers throughout her career. She has been a longtime collaborator with Alarm Will Sound – performing as a bassoonist, vocalist, and keyboardist – and has worked with many composers over the years, premiering a plethora of new works with the group. In NYC she has performed with Argento New Music Project and ACME, and has commissioned and premiered several new works with her ensembles Sylvan Winds, Quintet of the Americas, Trio Cabrini, and Orpheus Chamber Orchestra. In an ongoing personal project, Gina has commissioned and premiered works that combine her two passions – singing and playing the bassoon – into one performing experience. Composers writing for her include Sunny Knable, Gregg August, Jenni Brandon, and more.

As an educator, Gina currently holds positions at NYU and Western CT State University where she teaches bassoon, coaches chamber music, and teaches a variety of other classes. She is a frequent guest clinician at Bard College for The Orchestra Now and has taught master classes at universities such as Yale, Auburn, and Louisiana State. She spends her summers performing and teaching at several summer festivals including the NYU Summer Woodwind Institute, Orpheus@Mannes, and the Mostly Modern Festival at Skidmore College.

Introduced to the bassoon in the Massapequa, NY public schools, Frank Morelli studied with Stephen Maxym at the Manhattan School of Music and later became the first bassoonist to be awarded a doctorate by the Juilliard School. He has made nine appearances as soloist in New York’s Carnegie Hall playing concertos, Sinfonias concertantes, and even a solo ballad with the Carnegie Hall Jazz Band. The Miami Herald has hailed his "breathtaking virtuosity" and the Toronto Globe and Mailproclaimed his performance: "the kind of Mozart even the most tireless concertgoer is lucky to hear once a year."

Morelli has four solo CDs on MSR Classics: From the Heart: 20th Century Music for Bassoon and Piano and Romance and Caprice, with pianist Gilbert Kalish, Bassoon Brasileiro with the Orpheus Chamber Orchestra and guitarist Ben Verdery and Baroque Fireworks, which features harpsichordist Kenneth Cooper and bassoonist Harry Searing. The magazine, Gramophone proclaimed: “Morelli’s playing is a joy to behold.” The American Record Guide stated: “the bassoon playing on this recording is a good as it gets.” Of his DG recording of the Mozart Bassoon Concerto with Orpheus, Gramophone Magazine noted the "delicacy of articulation and colouring, [and] the lyrical warmth of the Andante." Fanfare Magazine added that this recording "reset a reviewer's standards at too high a level for comfort in a world more productive of ordinary music making." The Orpheus CD "Shadow Dances," which features Frank Morelli, won a 2001 Grammy Award.

A prolific chamber musician, Frank Morelli appeared with the Chamber Music Society of Lincoln Center on numerous occasions, including at the Whitehouse for the final State Dinner of the Clinton Presidency. He has participated in many major music festivals, including the Norfolk and Sarasota Chamber Music Festivals, Marlboro, Banff, Angel Fire, Casals Festival (France) and Music@Menlo. He is a member of Festival Chamber Music and the woodwind quintet, Windscape, in residence at the Manhattan School of Music with whom he has recorded two recent CDs, one featuring the music of Antonin Dvorak and the other music of Maurice Ravel (which includes his transcriptions of “Mother Goose” and “Valses Nobles et Sentimentales” both published by TrevCo).

Chosen to succeed his teacher, Stephen Maxym, Mr. Morelli serves on
the faculties of the Juilliard School, the Manhattan School of Music and
the Yale School of Music, SUNY Stony Brook, and is Distinguished Lecturer in Woodwinds at the Aaron Copland School of Music, Queens College, CUNY. Morelli’s students are active in major orchestras and on important faculties throughout the USA, Canada, Mexico, the Far East, and Europe. He iseditor of Stravinsky: Difficult Passages for Bassoon, a landmark excerpt book for bassoon and contra bassoon published by Boosey & Hawkes,and has several transcriptions for bassoon, woodwind quintet and other ensembles to his credit, published by Trevco Music. His unprecedented edition, The First Complete Weissenborn Bassoon Method and Studies Op. 8 Vols. 1&2 and Ludwig Milde’s Scale and Chord Studies Op. 24, is now available worldwide, published by Carl Fischer. Mr. Morelli performs exclusively on the Leitzinger Bassoon Model 1.